Francis Rynd and the development of the hypodermic syringe

Visitors to Ward Automations Sligo facility will be familiar with the Francis Rynd conference room.

Francis Rynd (1801 – 61) was an Irish surgeon from Dublin who is credited for aiding in the development of the hypodermic syringe. He is known for constructing a hollow steel needle used to inject medicine in 1844, while working at Dublin’s Meath Hospital.

While treating a woman who had pain in her face for years and was taking morphine pills without relief, he decided to place the morphine directly under her skin and near the nerves using a narrow tube and a cutting implement. When he announced that he had used a hollow needle to inject a painkiller intravenously into a patient, it sparked a medical revolution. It was soon called “the greatest boon to medicine since the discovery of chloroform”.

Later, Scottish surgeon Alexander Wood combined a hollow steel needle with a proper syringe to inject morphine into a human. 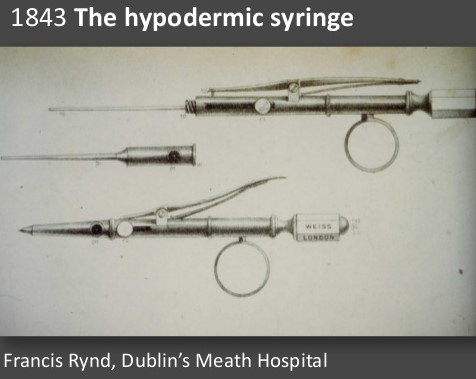